After years of heavy use, the car park of the Wycombe Swan theatre in bustling High Wycombe needed some care and attention. Deck Protect+ was chosen as the most appropriate coatings system to help make it usable again. 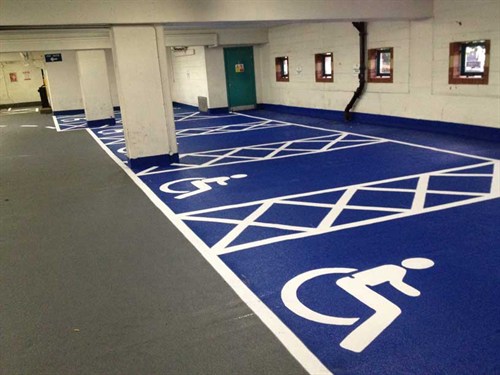 Opened in November 1992, the Wycombe Swan theatre is one of the social hubs of High Wycombe in leafy Buckinghamshire. It's been a popular venue since the start, with, for example, the period between August 2010 and July 2011, seeing 280 performances. That's a lot of visitors, and a lot of wear and tear on the car park built into the structure, which caters for both theatre-goers and the general public.

By early this year it was apparent that the decking on the levels of the car park would need to be refreshed. Markings had faded and become indistinct, while the original deck coating had worn thin and lost its anti-slip properties, making it unsuitable for purpose.

High Wycombe District Council put the work out for tender, but with a caveat - the car park could only be closed for seven days to allow the work to be carried out, and it would have to take place during a quiet period at the theatre, when there were no planned events - not easy for a building with such a busy schedule. Minimal disruption and efficiency were the watchwords.

As part of the tender process, USL StructureCare undertook a detailed survey of the structure beforehand, and found that, despite its poor condition, the 5,775m2 existing decking was suitable to be overlaid as part of the preparation works, which would include shot blasting, and removal of any loose material.USL StructureCare won the tender, and the work was scheduled between 29 July and 5 August this year.

Once the works had been instructed, and the car park closed to the public, the preparatory works began. Captive shot blasting teams worked from the covered upper-levels down to the basement level, and the deep clean of the decking surfaces was completed within the first two days of the contract.

The time had come to apply the coating, and it was decided to use Deck  Protect+, for it's fast-curing properties and lack of solvents, meaning there would be no pungent smell after application. In fact, no complaints were received from owners of adjacent properties during or after the works.

The new deck coating systems were installed in a series of colours - selected by High Wycombe district council to provide contrasting parking bays and running colours. The combination of dark grey for the parking bays and mid grey for the running aisles had been used successfully on a previous project for High Wycombe District Council, and was selected because of the advantages of darker colour tones needing minimal cleaning operations, while still offering an obvious contrast to assist with providing a user-friendly parking facility. Disabled bays were highlighted in blue, while restricted time parking bays were coated in a different shade of grey to set them apart. 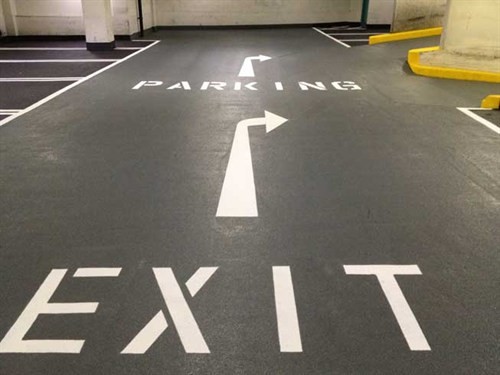 High Wycombe District Council had decided it wanted to use the refurbishment process as an opportunity to make the structure easier to use. Line markings were decided upon to achieve this goal, and once all of the deck coatings had been installed, double line markings to all parking bays were installed, and where possible, were extended up the parapet walls.

With the completion of the line marking, the work was completed - well within the set deadline of one week. In fact, High Wycombe District Council had made allowances for additional phased closures after the initial week, and had allowed for general contingencies. As it happened, neither of these was required.

Wycombe Swan Car Park is once again up and running for the benefit of the general public, and will continue to do so for a long time to come. Even car parks need some TLC sometimes.